You are likely aware that over the past decade ‘GMO’ or ‘genetically-modified’ food has gained a tarnished reputation among many U.S. consumers. But Big Ag, Big Food and their champions in the U.S. Federal Government have found a way to get around that bugaboo.  They have rebranded and renamed GMO foods to “Bioengineered” foods in the hopes that U.S. consumers can be tricked*.  In fact, starting on Jan. 1, 2022, U.S. consumers have begun to see labels on selected foods that say “bioengineered” or “derived from bioengineering,” (aka GMO) as the new federal law takes effect.  U.S. food manufacturers, importers and retailers must comply with this new national labeling standard for selected foods that have been genetically modified in a way that is not possible through natural growth.

Critics of the new law say the rules devised by the U.S. Department of Agriculture (USDA) will actually confuse consumers further about genetically modified foods and make it harder to know what is in any given product. One advocacy group has even sued the USDA to try to block the new regulations from taking effect**.

What foods are GMO / Bioengineered? 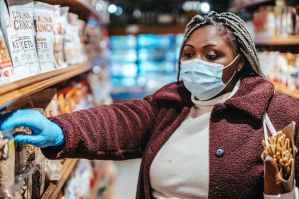 How will the GMO/Bioengineered notification appear for consumers?

Food companies with products that are genetically modified (GMO) and qualify as ‘bioengineered’ can comply with the new standard in several ways:

2-They can also use two logos approved by the USDA (see photo at the top of this article).

3-Finally, they can include a QR code for consumers to scan or a phone number for them to text that will provide more information about that food item. (As we have published previously, this is a great way to conceal GMO foods and GMO ingredients from consumers.)

*Thanks to the intense efforts of lobbyists, the new federal law PROHIBITS food producers from using more common terms on their labels like “GMO”.

**The Center for Food Safety, one advocacy group opposed to the new law, argues it makes it easier for companies to conceal what is in their products and leaves consumers in the dark.  The group has sued the USDA in federal court in an attempt to block the new rule. The lawsuit argues it will leave out many foods that are “highly refined” or contain levels of bioengineered ingredients that are not classified as ‘detectable’ by the government’s system. The group estimates that the majority of genetically modified food are processed food items containing genetically modified ingredients.  Additionally, the lawsuit argues that the new labeling standard discriminates against the poor, the elderly, people who live in rural areas and minorities who may lack a smartphone or access to the internet. It also puts an “undue burden” on shoppers to scan food items in stores during a deadly pandemic. The lawsuit is ongoing.