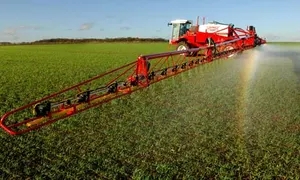 Researchers are increasingly concerned that residue from agricultural insecticide neonicotinoid is contaminating the food supply, potentially leading to harmful developmental and neurological effects for humans.

Researchers used data collected by the U.S. Department of Agriculture between 1999 and 2015 to examine the prevalence of seven neonicotinoids among food supplies, including fruit, vegetable, meat, dairy, water, grain, honey, and baby food…

The study found that, on average, 4.5 percent of the domestic and imported commodities had detectable levels of neonicotinoids. They were most frequently identified on fruits and vegetables, including apples, cauliflower and celery, largely because the insecticides are commonly used to treat fruit and vegetable crops. But their presence on a few “off-target” items, like water and a sample of dairy, shows that they’re infiltrating the broader ecosystem, too.

The study notes that many of the contaminated foods are frequently consumed by young children, and some of those insecticides made their way into samples of peach-, pear- and apple-based baby food, too. Those results highlight the need to evaluate the potential health risks of ingesting neonicotinoids, especially among children and pregnant women.

Most commodities’ residue levels were far below the Environmental Protection Agency’s legal standards, but the maximum residue levels found among samples of some commodities — including tomatoes, green beans and strawberries — approached or even exceeded those thresholds.

The findings raise concerns about the cumulative risks of neonicotinoid exposure, which have never been assessed by the EPA to determine tolerance levels.

The study comes from the Maryland Institute for Applied Environmental Health (MIAEH). Source