Endocrine-disrupting chemicals are in our food, water, products and general environment. They will be here long after you are gone and they dictate everything important about your well-being and the well-being of generations to come. Read this brief history about how and why they came into existence. 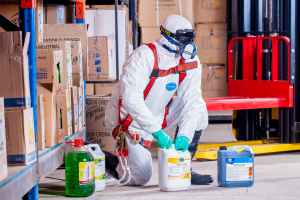 Synthetics created in the 20th century have become an evolutionary force, altering human biology and the web of life

PCBs and PFASs are now an integral part of the human story. They pass from species to species, from mother to child. They are present from conception to death, and consumed with daily meals and holy feasts. The presence of PCBs alone shapes how humankind reproduces itself, how our young develop, and even whether subsequent generations will be susceptible to certain cancers or resilient against disease.

The implications are disturbing…

…scientists have also turned to the next generation, looking at the implications for children who are exposed in utero and again while nursing, both critical windows of development where human bodies can be uniquely vulnerable to the effects of chemical interference. Scientists know that children’s bodies bear higher PFAS levels than adults, and have since learned that PFAS exposures can interfere with whether childhood vaccines take. In young men, higher levels of exposures are associated with shortened penis length and reduced sperm counts, suggesting that PFASs might play a role in the growing global epidemic of male infertility. Research is now looking into even more fundamental questions about how PFASs participate in a host of biological processes, including liver and thyroid function, metabolism, and in reproductive and developmental outcomes.