Despite the wealth of scientific and medical studies and subsequent news coverage sending out warning shots about the potential hazards of eating processed meats over the past two decades, the results of a new study reveal that people in the U.S. have not cut back on their processed meat consumption one iota.  In fact, Americans are eating the same amount of processed meat as they did eighteen years ago.

The study analyzed data from 43,995 adults aged 20 and up who participated in the National Health and Nutrition Examination Survey (NHANES) between 1999 and 2016.  Here are some fun facts from that study and processed meats in general: 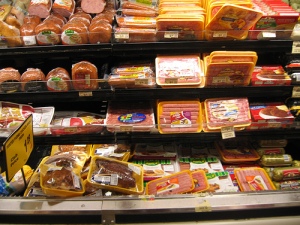 ♠ Processed meats are defined as red meat or poultry “transformed through salting, curing, fermentation, smoking, or with the addition of chemical preservatives”.

♠ Despite media coverage and awareness among healthcare professionals of the high risks of eating processed meat, consumption levels of processed meats has not declined over the past two decades. On average, U.S. adults still eat just as much processed meat today as they did 18 years earlier.

♠ Previous scientific and medical studies have demonstrated that processed meat consumption is linked to greater heart disease and diabetes risk.

♠ The World Health Organization’s International Agency for Research on Cancer (IARC) deemed processed meat a carcinogen in 2015, announcing it had found “sufficient evidence” that its consumption caused colorectal cancer in humans.

♠ WHO also declared that red meat consumption was “probably carcinogenic to humans,” based on links observed mostly for colorectal cancer but also in pancreatic and prostate cancers.

♠ Other studies have linked the consumption of processed meat with breast cancer.

For more information on the chemical additives in processed meats and the scientific and medical study findings linking these additives to adverse health conditions get our book.