In some parts of the industrialized world (like Australia) synthetic food dyes that have been linked in scientific studies to adverse health outcomes are banned. Food manufacturers from the U.S. make different versions of their food they sell abroad to meet these requirements, using natural food coloring in place of the synthetic dyes they use in the U.S.  And consumers from these countries are totally OK with it.  In fact, most prefer it.  But in the U.S. consumers find it more difficult to part with the colors that excited them at age six:  “After removing artificial colors from Trix, General Mills poured them back in last year to bring back a “classic” version in response to customer demand.”

<For an at-a-glance overview of what adverse health conditions the synthetic food dyes in U.S. cereals have been linked with in scientific studies, go here and also here.  And of course, there are more details in our book here.>

And while McDonald’s announced this past Fall that it had removed artificial colors from many of its burgers and Kellogg has pledged to remove them from its cereals by the end of this year, not all Americans are ready to part with the technicolor…U.S. consumers are accustomed to food dyes propping up their illusions in foods such as hotdogs, yogurt, soda, salad dressings, pickles, ice cream, fresh meat, breads, non-dairy coffee creamer, muffins, bagels, milk, lunch meat, butter/margarine, juice, pastries, sports drinks, strawberries, potatoes, oranges, apples, blueberries, and nearly everything in-between. Here are just a couple examples of food dyes routinely added to U.S. food:

CHEESE:  Check the packages of most cheddar cheeses, and they’ll likely list an ingredient called annatto, a plant extract from seeds commonly used as a food coloring…Another cheese that sometimes gets cosmetic help: mozzarella (without it, mozzarella would be beige or off-white).  Like many dairy products in the U.S., mozzarella cheese sometimes gets its bright white from titanium dioxide* …

EGG YOLKS: Many home cooks think darker egg yolks are fresher or more nutritious. But darker yolks aren’t necessarily healthier… in fact the color is likely the result of marigold petals, alfalfa or coloring products injected into the chicken feed.

SALMON:  Bright pink flesh may signal freshness to shoppers eyeing salmon filets, which is why farmed salmon may have been fed synthetic astaxanthin, a version of a naturally occurring compound. Salmon with a darker flesh can command an extra 50 cents to $1 per pound when offered side by side with lighter salmon…To help producers size up the desirability of their salmon, one food additive company offers a “SalmoFan ” with varying shades of pink to help food producers judge flesh colors. (The Food and Drug Administration requires that manufacturers declare on the product label if color additives were used for salmon.) 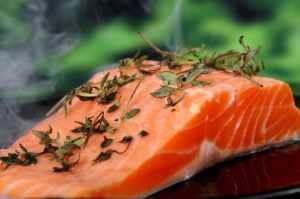 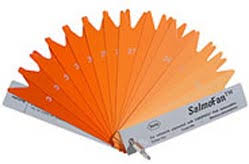 This additive is present in processed foods containing nanoparticles common on grocery shelves, and in fast food and conventional restaurant foods. Frequently unlabeled in U.S. foods (though nanoparticles are required to be labeled in EU countries) this additive is used as a white pigment food coloring for processed foods such as skim milk, white cheese, yogurt, frosting/frosted foods, icing, candies, snack foods, mayonnaise, salad dressings, powdered sugar, marshmallows, pudding, breakfast toaster pastries, and non-diary coffee creamer, among many others. It is also commonly used in medicines and toothpaste.

Scientists are still determining the health safety and potential health hazards of nanoparticles in food. According to the professional organization American Society of Safety Engineers, ingested nanoparticles can be absorbed through small nodules in intestinal tissue (Peyer’s Plaques) that are part of the immune defense system. If nanoparticles enter the digestive system and proceed into the bloodstream, they can potentially move throughout the body and cause damage. Additionally, “Nanoparticles may also accumulate in certain organs, disrupt and impair biological, structural and metabolic processes and weaken the immune system.” Animals studies have demonstrated that nanoparticle ingestion changes the structure of the lining of the intestinal walls. Among other potential problems, such structural changes hold the potential for over-absorption of harmful compounds. Additionally, research has indicated there are potential adverse health effects of nanoparticles on respiratory and cardiovascular systems, and studies of manufactured nanoparticles have demonstrated toxic properties. Among other health-related issues researchers are studying the potential link between Titanium Dioxide nanoparticles in food and an increased risk for inflammatory bowel diseases such as Crohn’s disease and colitis.