The results of a nine-month investigation conducted by Consumer Reports and the Guardian reveal that millions of people in the U.S.* continue to face serious water quality problems because of contamination, deteriorating infrastructure, and inadequate treatment at water plants**. Included in that contamination are what has been called “alarming levels” of toxic PFAS (per- and polyfluoroalkyl substances) “forever chemicals”***, lead and arsenic.

-Almost every sample tested had measurable levels of PFAS “forever chemicals”, a group of compounds found in hundreds of household products and linked in scientific studies to learning delays in children, cancer, and other health problems, and more than 35% of the water samples exceeded a safety threshold that health experts believe should be the maximum.

-Among the 120 samples tested, more than a third had PFAS levels above 10 ppt, and more than a quarter exceeded 5 ppt for a single PFAS chemical.****

-A total of 118 of the 120 samples had concerning levels of PFAS chemicals, arsenic or detectable amounts of lead.

-Approximately 8% of samples contained arsenic, which gets into drinking water through natural deposits or industrial or agricultural pollution.*****

-Almost every sample had measurable amounts of lead, a heavy metal that leaches from corroding water lines and home plumbing fixtures. It is unsafe at any level******.

* The samples came from water systems that together service more than 19 million people.

* At least 2,337 communities in 49 states have drinking water known to be contaminated with PFAS, according to a January 2021 analysis by the Environmental Working Group (EWG).

**** The U.S. Environmental Protection Agency (EPA) has still not set an enforceable legal limit for PFAS in drinking water. Instead, it has established only voluntary limits, which apply to just two of the better-studied forever chemicals, PFOA (perfluorooctanoic acid), and PFOS (perfluorooctanesulfonic acid), at 70 parts per trillion combined.  Harvard environmental health professor Philippe Grandjean has suggested that the limit should be just 1 ppt for PFOA and PFOS, citing his 2013 research– partly funded by the EPA – showing decreased vaccine response in children exposed to the chemicals.

***** Research suggests that exposure to even low levels of arsenic can pose health risks over the long term. A 2014 study in the journal Environmental Health found an association between water with arsenic of 5 ppb or greater and a five- to six-point IQ reduction in children. In the early 2000s, the EPA considered a drinking water limit for arsenic of 3 ppb, before settling on 10 ppb as an amount that balances the costs for water system operators while reducing health risks.

****** The EPA says utilities only have to take significant steps to lower lead levels, including replacing lead service lines, when 10% of samples from homes in their service areas exceed 15 ppb.  Consumer advocates say those EPA regulations are problematic.  According to EPA estimates, an estimated 3 million to 6 million homes and businesses nationwide still get water through older lines that contain lead. An untold number of homes have plumbing fixtures made of the heavy metal. Exposure can especially pose risks in children, such as reduced IQ and behavioral problems. 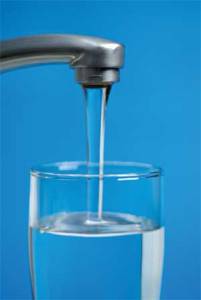 America’s water crisis, while widespread, affects some communities more than others, according to an analysis of more than 140,000 public water systems published by the Guardian in February 2021. It found that access to clean drinking water is highly unequal in the US, with water systems that service poorer and rural counties far more likely to have violations than those that provide water to wealthier or urban ones. Water systems in counties with large Latino populations were particularly likely to have violations.

The Problem with PFAS Chemicals in US Water Systems

“The PFAS results from the recent tests are particularly troubling.

Manufacturers use PFAS to make stain-resistant fabrics and carpets, water-repellent clothing, nonstick cookware, and hundreds of other common products. The compounds can seep into water from factories, landfills, and other sources. And because they don’t easily break down in the environment, they’re often called “forever chemicals”.

Investigation into the health effects of PFAS exposure is ongoing, but some of the strongest evidence about their potential risks comes from research of about 69,000 people in and around Parkersburg, W Va. The research – part of a settlement between DuPont, which makes some PFAS, and residents of the community – was depicted in the 2019 movie Dark Waters.

It found a “probable link” between exposure to a type of PFAS and six health problems: high cholesterol, ulcerative colitis, thyroid disease, pregnancy-induced hypertension, and testicular and kidney cancers. Research has also linked some PFAS to learning delays in children.” source

How to test your drinking water