It was recently made public that the period underwear* brand Thinx had reached a settlement in a 3-year-long class action lawsuit claiming its products contain harmful chemicals**. News of the settlement brought renewed focus on the chemical compounds at the center of the lawsuit, namely, toxic PFAS forever chemicals*** (per- and polyfluoroalkyl substances), and the broader issue of toxic ingredients in period products as a whole.

The presence of PFAS in Thinx products was first revealed three years ago, when Sierra magazine published an investigation, in partnership with a researcher at the University of Notre Dame, that found toxic PFAS chemicals in the crotch area of Thinx underwear. Later that year, at least three different lawsuits filed against Thinx included further evidence from third-party testers of PFAS and other toxins in the underwear.” (source)

The irony was that Thinx marketed itself as an “organic, sustainable and nontoxic” alternative to traditional one-use menstrual products, including pads and tampons, for consumers proactively seeking out safer, more environmentally friendly products, when, in fact, it was a highly toxic product.

Do other brands of period underwear contain toxic chemicals?

That remains to be seen.  It would require an independent laboratory to test the products. 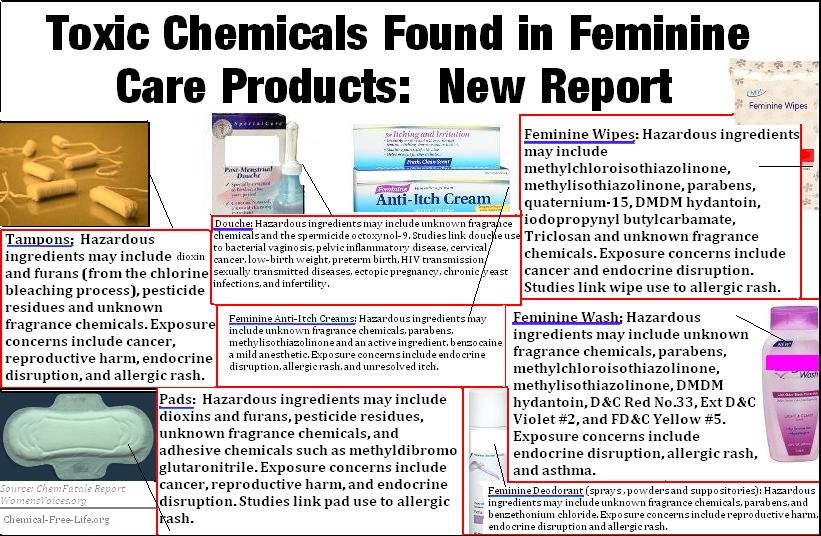 We have previously posted pieces focusing on the results of lab testing in the ChemFatale Report done in 2017 that found disturbing levels of chemicals of concern in many different types of feminine products including tampons, pads, creams, deodorant, douches, washes and wipes. Additionally, after lab testing dozens of products in 2022, one environmental blog reported PFAS in pads, panty liners and incontinence pads.

Why period products that contain toxic chemicals are especially problematic

Scientists says that one of the main concerns with toxic chemicals like PFAS in period products is that the vaginal area is extremely sensitive.  This area of the body is also known to absorb chemicals (studies have shown that the vaginal canal can be an effective channel for delivering certain medication into the bloodstream because of its highly absorbent nature).  Endocrine disrupting chemicals, such as those that have been found in period products, including PFAS chemicals, are particularly problematic because the brain and body are more vulnerable to changes during menstruation.  But science has yet to uncover the full effects these toxic chemicals may have on women, including whether PFAS and other chemicals of concern in these products seep into the bloodstream in higher concentrations than they do via other products, like food packaging, cookware, waterproof mascara or shampoo. As for period underwear, studies have not looked specifically into whether PFAS found in these products are absorbed by the body, so we simply do not know the level of risk.

Given all of the unknowns, and the FDA’s lack of oversight of these products, consumers are really left on their own to determine which products, if any, are actually safe and free of chemicals of concern.  The most prudent, though not always reliable approach (remember that Thinx marketed itself as “organic, sustainable and nontoxic”) would be to choose products that specifically say they are free of toxins (Sierra Magazine’s product testers have identified some brands that they claim are free of toxins).

*Period underwear are designed to work similarly to traditional menstrual pads; they can soak up blood but, unlike a disposable pad, the underwear can be washed and reused.

**Thinx, as presumably their competitors do, registered its underwear with the U.S. Food and Drug Administration (FDA) as a medical device. Because of the classification, these products are not subject to rigorous testing, nor do manufacturers need to label all the materials used in them.

***PFAS chemicals (per- and polyfluoroalkyl substances) are toxic to humans, animals and the environment. They are comprised of approximately 12,000 compounds. They are ubiquitous in the U.S., appearing in thousands of consumer and industrial products and are typically used to make products resist water, stains and heat, including household products (like carpeting, curtains, furniture upholstery, waterproof and stain-resistant flooring, etc.), cooking supplies (including cooking utensils and bake ware), clothing, personal care products (like cosmetics, including waterproof mascara) and even food (PFAS appears in processed food packaging for humans and pets) and public drinking water (tap water) that affects an estimated 2 million Americans. PFAS chemicals are usually found in products labeled “stain-proof” and “waterproof”.  PFAS chemicals also appear in fire-fighting foam and other industrial products used at airports and military bases across the country, where the chemicals have leached into the groundwater. PFAS chemicals are known as “forever chemicals” because they do not readily break down in the environment or human body.  PFAS chemicals have been linked in scientific and medical studies to a variety of serious health conditions including cancer (including testicular cancers), kidney disease, heart disease, thyroid problems, reproductive problems, endocrine problems (PFAS has been found to disrupt hormonal functions with some research suggesting that the PFAS chemicals are linked to accelerated ovarian aging, period irregularities and ovarian disorders like polycystic ovarian syndrome), and liver problems. Some newer PFAS have been found to accumulate in organs, so in some cases, science simply cannot detect the toxic chemicals when testing for it in blood.